St Peter’s is one of the three parishes covering the ancient town centre of Nottingham. Domesday Book refers only to St Mary’s, the pre-Conquest foundation in the old Anglian borough; St Peter’s and St Nicholas’ were established after the Conquest, quite possibly before the end of the 11th Century, in the ‘French borough’ which rapidly grew up between the old settlement and the Norman castle. The earliest reference to these two churches is in about 1108, when William Peveril gave them to the newly-founded Lenton Priory.The first church, was built on a rock above the marsh formed by the Rowell Brook. This is now St Peter’s Square, and the marshy conditions caused problems for the parish authorities for centuries. It was presumably a simple building with a nave and a round apse. It was destroyed – perhaps twice – in the mid-12th Century.

The church was rebuilt between 1180 and 1220, with a south aisle; some of this building remains in use today, perhaps incorporating fragments of the earlier church. The tower and spire were added shortly before the Black Death, which reached Nottingham in 1348 and stopped further work for some years.

The final addition to the mediaeval church was the clerestory, with a new oak roof to the nave. This was built about 1480, when wood was given by Nicholas de Strelley from his estate outside the town. The weight of the new stonework pushed the ancient south arcade out of true, and though collapse was prevented by new buttresses to the south aisle, the columns towards the east end of the nave are still clearly far from vertical. 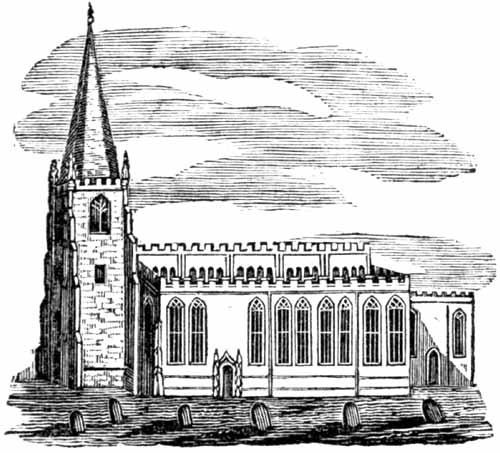 Like most mediaeval churches, St Peter’s contained many chapels and chantries, often with their own chaplains or mass-priests. Six chapels are known by name, though the location of some of them within the church is not certain.

After the Restoration, St Peter’s chancel was rebuilt, though on a smaller plan than before. The mediaeval chancel arch remained, though it had a gallery in front of it and was built up almost down to the level of the capitals.

The tower, and particularly the spire, has been prominent in the Nottingham townscape for 600 years. Over the centuries there have been many repairs: the top part of the spire seems to need rebuilding once or twice a century.

Nottingham was changing its face dramatically by the 1820s, as a flood of textile workers and a huge expansion of industry led to tenements being built over the gardens and to gross overcrowding around the town centre. The Narrow Marsh and the Broad Marsh (the latter in St Peter’s parish) became some of the worst slums in Europe, and suffered badly in the cholera epidemics of 1832 and later.

The church itself also underwent changes. The south door was closed about 1820, extra pews were installed and the west door was re-opened. But it was the major rebuilding of the chancel and north transept in 1877, and the associated re-ordering of the nave, which gave us most of the church we see today. The new chancel at first opened straight from the nave, giving a much more spacious impression than before (the present rood screen was erected only in 1898), and the great tower arch could again be appreciated once the organ gallery had been removed from the west end. New pews replaced the Georgian box-pews, which were used as an elegant wainscoting round the walls.

Victorian stained glass, some of good quality, was inserted in several windows at this time, mostly as memorials to clergy or notable families, but the church has retained enough plain glass to keep it light. The windows designed by Sir Ninian Comper in the north aisle, inserted in the 1960s, continue this tradition of filling the church with light. 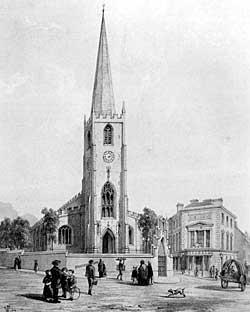 A change in the fortunes of St Peter’s occurred in 1933. As part of a re-structuring of parishes in the city, St Peter’s benefice (which had been vacant for two years pending decisions of the ecclesiastical authorities) was united with St James’ Standard Hill.

Two strong rectors strengthened the important place of St Peter’s in the city centre. Arnold Lee (rector 1937-48) did much to make the church a centre of rest and peace, comfort and support, during the Second World War – a role which it continues to have. Angus Inglis (rector 1948-79) was also devoted to his flock and established a strong tradition of worship, continuing the choral tradition which dated back to the 19th Century. But it was his efforts in beautifying the church – new windows, a new pulpit, new lighting, redecoration of the chancel and finally a new west door with fine ironwork – and above all his acumen in negotiating with the authorities and others through the 1960s, during the redevelopment of the Broad Marsh and of St Peter’s Square, which are Inglis’ best memorial. Through promoting two private acts of Parliament he established a basis for future development around the church. The Broad Marsh Centre replaced the slums and devoured the church hall and burial ground. St Peter’s Church Side, the street south of the churchyard, disappeared under the extension of Marks & Spencer’s store.

After Angus Inglis there was a move in the church’s life to clearer social involvement with the disadvantaged of the city, with a more all-encompassing openness and links with local and international charities. Though there was no full-scale re-ordering, a dais was created at the east end of the nave, permitting the occasional use of a nave altar, and a new internal north porch was built, linked to a small room for private consultation and freeing space in the north aisle for circulation and a small library. A coffee room in the St James’s Room began to attract visitors to the church and from the street.

All this expansion meant that more space was needed for clergy and staff, and for social purposes (there had been no church hall since the Broad Marsh development of the 1960s). A church office was established in rented rooms on the second floor of a building in St Peter’s Church Walk, overlooking the church but difficult of access. In 1993 an approach from Marks & Spencer to the church, to permit further development of the store towards the church, led to new negotiations. The weight of these fell on Leslie Morley (rector 1985-99), who was still able to develop the church’s philosophy of acceptance which is now its hallmark. The results have been spectacularly successful. 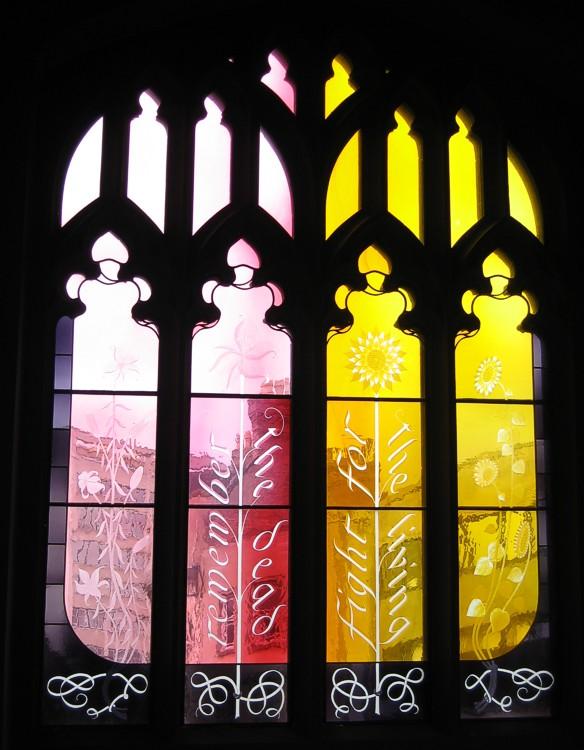 Thanks to Marks & Spencer’s the church now has, in the St Peter’s Centre, an elegant building a few yards from the re-opened south door. It contains a suite of offices and an attractive seminar room on the first floor, with a spacious expansion of the old coffee room on the ground floor, designed to retain a measure of ecclesiastical flavour in a modern setting: the decoration of the roof of the restaurant is derived from the painted chancel ceiling. The newly landscaped churchyard lost no ground in this operation but is more enclosed by the large windows of the store extension – which from inside give a splendid new perspective on the church – and by fine ironwork gates. New stone steps lead up from St Peter’s Square to the west door, restoring the link with the world below. The Centre backs on to the store but has its own character and, in its prominent position overlooking the Square, offers new opportunities for ministry.

More details of the history of St Peter’s Church can be found on the website of the Southwell and Nottingham Church History Project.

Please contact the Parish Office for details of any events or to get in touch with a member of staff.

All correspondence should be sent to the Parish Office (not to All Saints’ or St Peter’s church).

The office is situated on the upper floor of the St Peter's Centre, on the south side of St Peter's Church and adjacent to Marks & Spencers.

If you wish to trace a former resident or member of the parish, please address your requests to the Nottinghamshire Archives.

For information on service times at All Saints' & St Peter's, please visit the Services page.

Ensuring that children and young people as well as adults are kept safe whilst in our care is an integral part of our church life.
If you have any concerns about safeguarding please contact:

Tuesday and Thursday
9am - 4pm

Open Monday - Saturday, 10am - 4pm
(and for Sunday services)

Please contact the Parish Office for details of any events or to get in touch with a member of staff.

All correspondence should be sent to the Parish Office (not to All Saints’ or St Peter’s church).

The office is situated on the upper floor of the St Peter's Centre, on the south side of St Peter's Church and adjacent to Marks & Spencers.

If you wish to trace a former resident or member of the parish, please address your requests to the Nottinghamshire Archives.

For information on service times at All Saints' & St Peter's, please visit the Services page.

Ensuring that children and young people as well as adults are kept safe whilst in our care is an integral part of our church life.
If you have any concerns about safeguarding please contact:

Tuesday and Thursday
9am - 4pm

Open during Sunday and weekday services and on Tuesdays & Wednesdays from 10.30am – 12.30pm.

Open Monday - Saturday, 10am - 4pm
(and for Sunday services)